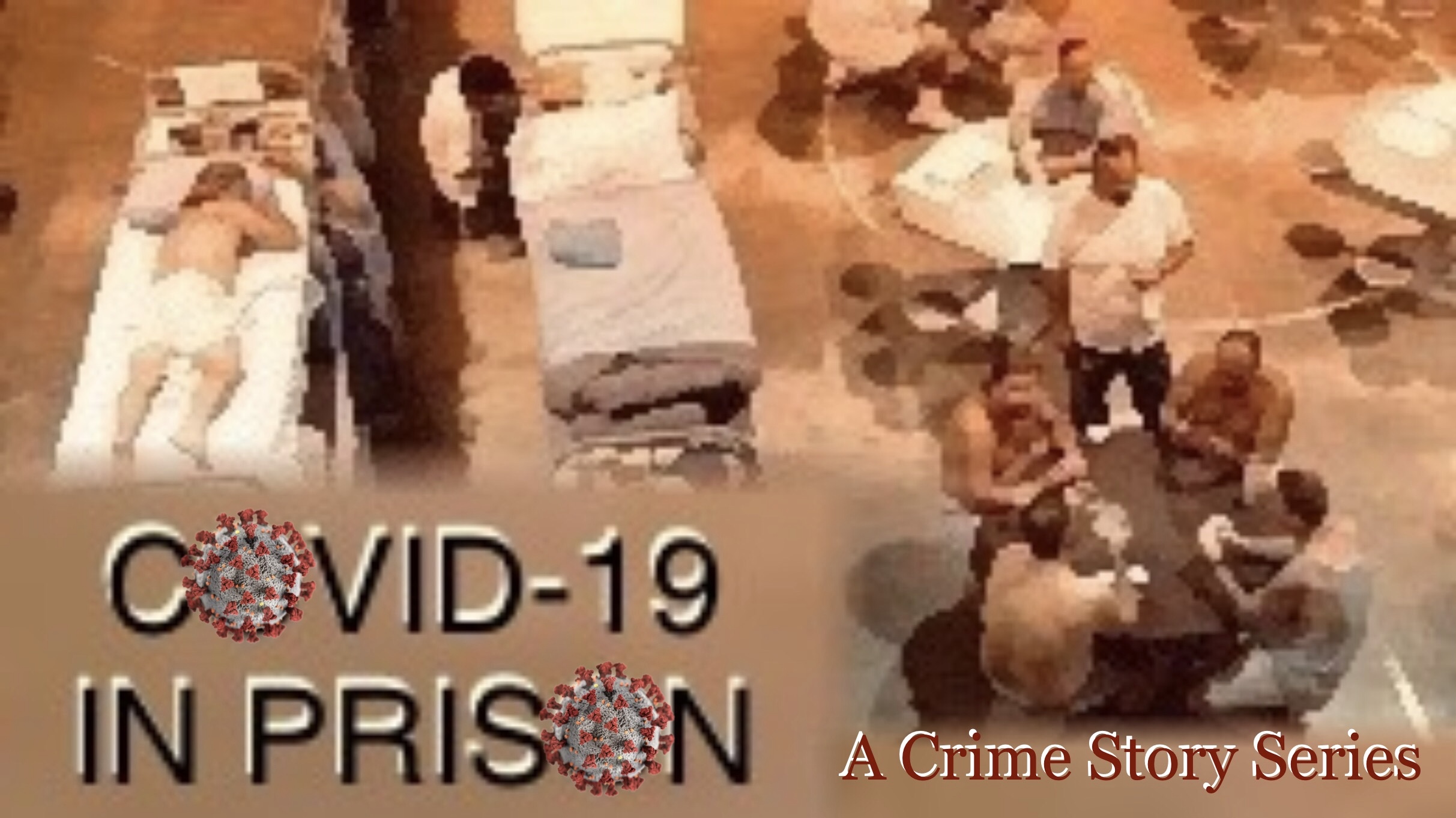 You can find links to each of Sean’s analysis pieces here. This article covers the week beginning March 22.

In state houses and the nation’s capital, reactions to the COVID-19 threat intensified during the week. By Wednesday, March 25, 27 states had issued shelter in place orders. That same day, the US Senate passed the CARES Act, a $2 trillion stimulus plan; President Donald Trump signed it into law on Friday, March 27. 3,283,000 people had applied for unemployment the previous week, the largest number of weekly jobless claims ever filed by the Labor Department. Late in the week, the US laid claim to the most cases of COVID-19 in the world, at 82,404; and California’s coronavirus death-toll topped 100.

Journalists continued to investigate the unique threat that COVID-19 represents to our nation’s incarcerated, paying close attention to those regions with the highest numbers behind bars: New York and California. This bicoastal bias will change in the upcoming weeks, but for the moment, the media’s attention was trained on the East and West coasts.  The leading source of concern was New York City’s aging Rikers Island complex. With astonishing speed, Rikers became Ground Zero for the nation’s largest coronavirus jail outbreak to date, with both inmates and staff testing positive there. (As a side-note, movie producer Harvey Weinstein, sentenced to 23 years for rape and sexual assault, also made headlines when he tested positive for COVID-19. State prison officials theorized, with some degree of self-interest, no doubt, that the celebrity inmate had contracted the virus during his sojourn in Rikers.) Rikers Island quickly became symbolic of the terrifying susceptibility of the nation’s inmate population. In 38 Test Positive for Coronavirus in NYC Jails, Including Rikers (Associated Press, March 22), New York State Board of Correction interim chairwoman Jacqueline Sherman describes a “jail system in crisis.” Sherman proposed a disarmingly simple solution to the pandemic’s threat: decarceration. “The best path forward to protecting the community of people housed and working in the jails,” she reasoned, “is to rapidly decrease the number of people housed and working in them.”

Decarceration became a touchstone, with New York City Mayor Bill de Blasio working with city prosecutors to identify inmates for potential early release. Together they settled on a total of 56, a number which struck criminal justice advocates as unrealistically low. “There are nearly 1,500 people incarcerated in Rikers Island for low level offenses or technical parole violations who can be released immediately,” chided Bianca Tylek, Executive Director of Worth Rises, a non profit, inmate advocacy organization dedicated to dismantling the prison industry.

West Coast decarceral efforts are the subject of Aviva Shen’s SLATE article, How to Prevent a Coronavirus Catastrophe in Jails (March 21). Shen examines ongoing efforts by the Santa Clara County Sheriff, working with prosecutors and public defenders, to immediately reduce the jail population there. It’s an uphill fight, observes Shen. “It’s no easy task to reverse-engineer a system that’s accustomed to processing thousands every day into incarceration into one that can let them out.” What’s required is a fresh calculus about individual versus societal good, some new math which is perplexing for involved. Shen quotes Santa Clara County Prosecutor Max Zarzana on his changed thinking. “Before, I might make a straight-faced and heartfelt argument to a judge that goes, ‘You can’t let this person out because as soon as he gets out, he’s going to steal somebody else’s car,’ said Zarzana.” In a post-COVID world, Zarzana finds himself making the opposite plea: “‘Judge, look, I know that if you let this person out, he really might steal somebody else’s car, but stealing  a car is not worth a death sentence from dying in prison due to COVID or increasing the risk of exposure to other people.’”

Paige St. John explores COVID-19’s appearance in California prisons in First inmate in California’s Prison System Tests Positive for Coronavirus (Los Angeles Times, March 22). St. John has done stellar work throughout the current shutdown reporting on changing conditions in the California state prison system. St. John writes that a prisoner at a Los Angeles County prison tested positive as did five prison workers, unwelcome news in that California “already has halted visitation, prison volunteer programs and educational activities and has started screening staff.” In other words, despite all due precautions, the lifeboat has still sprung a leak.

Two days later, Justin Carissimo detailed Los Angeles County’s ongoing decarceration procedures in 1,700 Inmates Released from Los Angeles County in Response to Coronavirus Outbreak (CBS News, March 24). Los Angeles County Sheriff Alex Villanueva announced that with the mass release —limited to inmates serving time for non-violent crimes or who had under 30 days left on their sentences — Los Angeles had reduced its inmate population by 10%. That’s a significant number compared with New York City’s tepid effort. Carissimo quotes Los Angeles District Attorney Jackie Lacey, who revealed that the underlying moral calculus at work in Santa Clara County was being applied in LA: “I have asked my attorneys to consider the health risks in every decision they make… I have directed them to consider ways to keep nonviolent felony and misdemeanor offenders out of our jails and courthouses during this pandemic.”

Subsequent articles during this week explored resistance to decarceration. Daniel A. Gross’s “It Spreads Like Wildfire”: The Coronavirus Comes to New York’s Prisons (The New Yorker, March 24) argues persuasively that as an employer and out-sourcer of low-wage labor —with most prisoners making from $0.16- $0.65 per hour, the carceral system has an undeniable financial interest in keeping inmates behind bars… and working. That New York State inmates were manufacturing hand sanitizer they themselves were forbidden to use was a shameful irony apparent to all. Even more outspoken was Nick Martin’s excoriating thought-piece in The New Republic, The Pandemic Economy in American Prisons (March 24). Martin captures the Capital v. Decarceral conflict beautifully: “Where conversations of mass release should exist, instead stands a Monopoly Man character rubbing his hands together, wondering how he’ll profit off those with no options.”

On March 25, the Los Angeles Times’ Paige St. John provides more evidence that the prison system, especially California’s, had been caught off-guard by the pandemic and was desperately playing catch-up. In Prison Lawyers Seek Emergency Order on Coronavirus, Including Release of Inmates, St. John reports that the state’s Department of Corrections and Rehabilitation “has said it is bolstering its defenses with gateway screening, additional cleaning and distributing extra soap to inmates who ask for it.” St. John makes it clear that the CDCR is obstinately fighting today’s battle using yesterday’s tactics: “‘We have long-standing outbreak management plans in place to address communicable disease outbreaks such as influenza, measles, mumps, norovirus and varicella,’” she quotes from a Department statement, “‘as well as preparedness procedures to address a variety of medical emergencies and natural disasters.’”

As in Week One, the most striking observations about COVID-19 and the prisons came from inmates themselves, with multiple reports about prison administrators caught unprepared, applying outdated methods to fight the pandemic. In How Coronavirus Is Changing Life Inside San Quentin State Prison (The Appeal, March 27), incarcerated journalist Juan Moreno Haines quotes Inmate Advisory Council President Christopher Scull, who criticizes San Quentin Prison officials for “treating [COVID-19] like any epidemic in prison — that is to isolate, treat and then release back into the population.” That such an approach was not only obsolete but potentially dangerous was apparent to all, including prison hierarchy.  “[The administration is] taking more advice from the population as far as what should be our priorities,” Scull continued.

Week Two of Crime Story Daily’s news aggregate captures a prison system ill-prepared for the coronavirus and improvising solutions, some radical but most woefully out of date.