Paul and I met through my involvement in the alumni of Georgetown Law, where he is a professor, and one of the nation’s most frequently consulted scholars on issues of race and criminal justice. Prior to becoming a professor, he served as a federal prosecutor with the U.S. Department of Justice.

Paul provides legal commentary for MSNBC and NPR and has been featured on 60 Minutes and profiled in the Washington Post. A law professor at Georgetown University, he is the author of Let’s Get Free: A Hip-Hop Theory of Justice, winner of the Harry Chapin Media Award, and Chokehold: Policing Black Men (both from The New Press). He has published numerous op-eds and book reviews, including in the New York Times, the Washington Post, the Boston Globe, and the Los Angeles Times. He lives in Washington, DC.

The team here at CRIME STORY could not be more thrilled that we now have Professor Butler in this formal role as Consulting Editor. 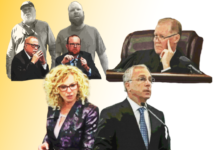