Today’s podcast is a conversation with Steve Zaillian. Steve won an Oscar for writing the screenplay for Schindler’s List and won a Directors Guild Award for his miniseries The Night Of.

The conversation was recorded as part of a series of classes that I taught at The University of Southern California’s School of Cinematic Arts. Each week I would host an artist for a discussion that would help us better understand the values and aims of storytellers in the world of crime and justice.

I got to know Steve working as the HBO executive overseeing The Night Of. Steve served as showrunner, executive producer, director, and co-writer of that series. My experience working with him on The Night Of was a significant inspiration in creating crimestory.com and this podcast.

You can read the podcast transcript here. 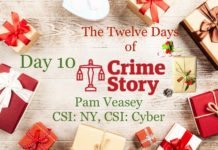 Day 4: Steve Zaillian, The Night Of